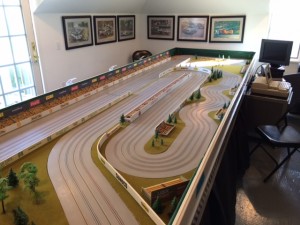 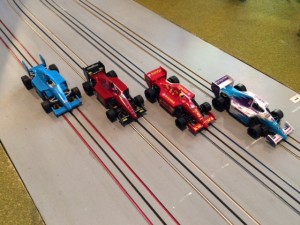 spot. Pete Medeiros rounded off the field with 155 laps. Peter Lentros had a best lap total of 53 laps on the white lane and a best lap time of 5.112 on blue lane. 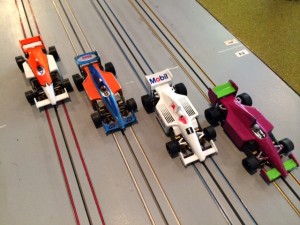 It should be noted that his best lap times for each lane were less than 5 seconds with a best lap time of 4.750 on the white lane. His highest lap total was a 58 also on white. A fantastic car with fantastic driving skills led John to a fantastic win.

Second place finisher John Stezelecki could only manage 215 laps but was happy take the second place points. Stez didn’t have a single lap time of less than five seconds with a best of 5.148 on yellow lane. Paul Ryer placed third with 211 laps and had a best lap total of 54 on white and blue and a best lap time under 5 seconds with a 4.976 on white lane. John Pileggi took the fourth ribbon spot one lap behind Ryer with 211 laps with a high lap total of 55 on yellow. Rob Hayes placed 5th with 208 laps. Rob almost broke the below 4 second lap barrier on white with a 5.051. Taking the sixth spot was Vince Tamburo who scored 206 laps. Ryan Archambault moved up to pro in this event after Peter Lentros (who wasn’t feeling well) decided to let Ryan make the jump up. Ryan finished 7th with exactly 200 laps which what he also scored in the amateur event.  Tom Gray had a pretty good handling car and scored 199 laps to take the 8th spot. Dave Muse completed the Pro field with a 190 lap finish and placing 9th.

Peter Lentros walked away with this race by nine laps over Ryan Archambault. 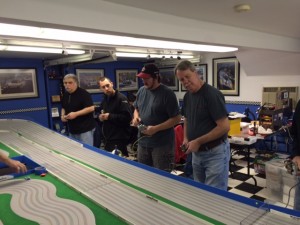 Things heating up on the Nuvolari

Peter scored 429 laps and had a best lap total of 75 on green lane. Ryan Archambault scored 420 laps and a high of 75 laps on white for the second place finish. Oh Jimmy Colligan placed third scoring 382 laps. Peter Medeiros Jr. banged out 381 laps for the fourth place ribbon while his father took fifth out of the amateur SS column with a 317 lap total.

We ran a Semi event with John Reimels winning it with 472 laps followed by John Pileggi with 467, 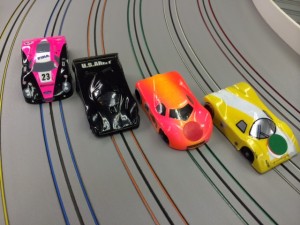 John Reimels took the victory by four laps over his closest competitor blasting out 288 laps and had his best total of 50 laps on the white lane. Both Rob Hayes and John Pileggi tied with 284 laps but it was Hayes who took the second place ribbon by just sections over John Pileggi. Rob’s best lane was green and white with lap total of 49 in each lane. John Pileggi took the third spot which had to be very disappointing to John after he scored the second place finish in 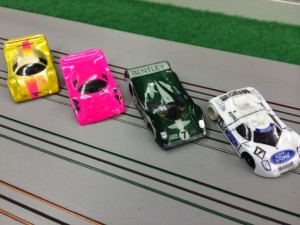 the Semi event. John also had a best lap total of 50 on green lane. Twenty laps behind third place finisher John Pileggi was club director Paul Ryer with a total of 264 laps. Paul’s fourth place finish gave him the final podium spot. His best lap finishes were on both orange and white lanes with 45 laps each lane. Three laps behind Paul was Ryan Archambault with 261 laps. Ryan ended up with a pretty good day having made every race of the event with his Pro move ups. His best lap total was 49 on white lane. Rounding out the top sixth position was Tom Gray with 259 laps and a best lap total on green lane with 46 laps.

MARC next event will be at South Shore Speedway in Hingham, MA on December 13th 2014