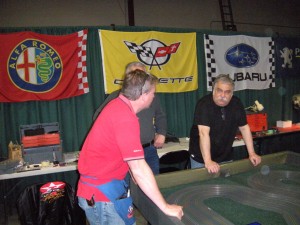 the top spot for the season or would the wily Dr. Pileggi remain on top?  We will see.  In the amateur class, things were not close in the standings as Benny had hold on first in both classes, but he does love those ribbons and was looking for a good run.  In any case 22 drivers showed up to drive.  The tracks for this event would be the wicked fast Brystal Viper for MARC Spec Stock and the Buck Scorpion for CMPM. While you can catch your breath on the Viper, the tight and fast Scorpion earns it name with its sting.  Remember to breathe or you’ll pass out.  Just don’t blink.

Everyone is starting to get used to the Viper and people were dialed in and fast.  Some tuning of the track has made it glass- like smooth and smokin’ fast.  First up were the amateurs.  The usual cast of characters were joined by Ryan Archambault, Tom Smith, Don Hall, and recently arrived from Pennsylvania, Ed Bianchi. Always good to see new and 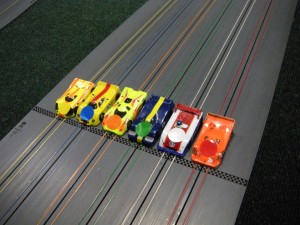 Spec Stocks on the Viper - a very nice combination

seldom seen faces. The amateurs kept the racing clean and the lap totals reflected it.  The top three drivers were only separated by seven laps.  The regulars were caught napping as Don Hall took first and Ryan Archambault took second.  I think these guys have been sneaking in and practicing when nobody is looking.  Benny Leyro cruised in at third.  Peter Medeiros had a race winning pace going until he threw a wire in his last heat. Even so, he finished fourth.  A nice drive by Ed Bianchi considering it was his first time on the Viper and first time driving the MARC Spec Stock car.  Peter Lentros opted to race 1/24 scale retro cars and missed a few heats.  Excellent drive by the amateur group.  Fast and clean. 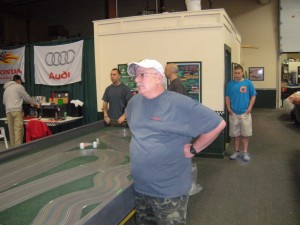 Don Hall decided to go out on top and skip the move up.  Ryan was looking for more so he took the move up to run with the pros.  A field of 11 drivers took to the track for the pro race.  These cars are a blast to drive on this track.  The race was fast paced.  John Pileggi, Paul Ryer, and Erik Eckhardt were in a tight battle for the podium spots all the way through the race.  In the end just six laps separating them with John Pileggi taking the top spot followed by Paul and then Erik.  Jonathan Reimels squeaked out an extra lap over the Senior Reimels to take fourth.  Great drive everybody. 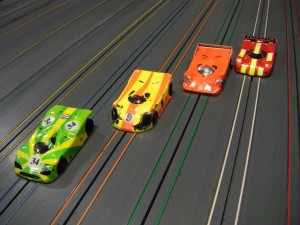 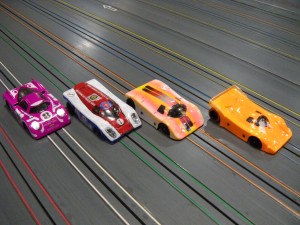 Next up was CMPM on the Scorpion.  Time to speed up those reflexes.  You’d think some guys might opt for slightly tamer motors, but they didn’t.   A couple of 35s and many 36

motors were out there.  Speed Crazed Morons were in the house.  Unfortunately, or fortunately, depending on how you look at it, the red lane stopped counting in practice.  Since a quick fix could not be found it was decided to run the race on the 5 remaining lanes.  As practice progressed, several drivers decided to sit this one out. So, four amateur drivers took to the track.  The race was wild with cars everywhere.  The Scorpion is a difficult track to tame.  Right at the start Pete Medeiros spun a pinion, a problem he’d been having all throughout practice.  Seeing as it was the last race and would not impact the points standing, the remaining drivers allowed Pete to use a loaner so he could participate in the race.  Thanks guys, this is one of the things that makes this a great club to race with.  Unfortunately, somewhere along the line Benny’s car suffered a hit that knocked a bearing out of place that then melted the chassis and knocked him out of the last 2 heats.  In the future we’ll need to watch for marshal damage and make sure it’s called when appropriate. When the smoke cleared it was Ryan Archambault on top followed by Tom Bussmann, Pete Medeiros, and Benny Leyro. 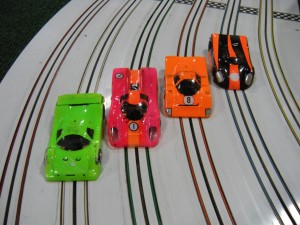 Time for the pros to take to the track joined by Ryan. He didn’t make many races this year so I think he was trying to get in as much racing as possible.  Mr. Hayes joined us looking very dapper in shirt and tie fresh from the Berklee College of Music commencement ceremony.  Jumping in what could possibly be the last remaining phone booth, he emerged in subdued flannel, Rob Hayes, CMPM driver.    Nine drivers competed in what was the last race of the season.  As in the amateur race, a couple of drivers struggled to keep their cars going, Tom and Bill had some issues, but were able to limp their cars home.  Once again Dr. Pileggi demonstrated his mastery of the CMPM cars taking first.  Rob was second closely followed by Jonathan Reimels.  Ryan made the most of his move up taking the fourth place ribbon.

And so another day of racing, another MARC racing season comes to an end.  Reflexes and car setup were tested and drivers were spent after a hard day of racing.  See you next season!

On a final note, congratulations to Benny Leyro winning both the Amateur Production and Champion series!  Benny had the field covered in both classes and his reward is he will be running with the pros next season.  And congratulations to Jonathan Reimels winning both the Pro Production and Champion series!  Jonathan had a good handle on the Production series, but he had to wrestle the championship series from the always tough Dr. Pileggi.  They were tied in points so the championship was decided on number of wins.  Great racing guys.