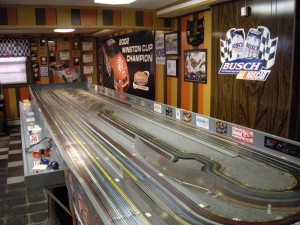 Tighten your seats belts for you have entered The Danger Zone dun, dun, dun

Benny Leyro at his super fast track aptly named The Danger Zone where we would be racing MARC Spec Stocks and CMPM Modifieds (and eating wonderful food – JR).   Benny had the track in great shape, the coffee was percolating and the Entenmanns’s donuts were plentiful.  At 8:30 the power was turned and the festivities were under way. 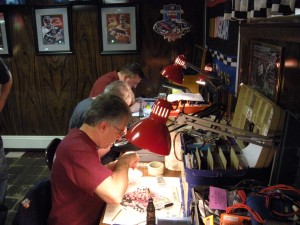 Striving for the elusive perfect set up

of the season, track owner Benny and local expert, Tom Bussmann.   Turbo immediately made his presence known by setting fastest lap of the race in his first heat along with a high lap total of 59 laps.  Both Benny and Tom tried to keep Turbo honest by pushing him hard throughout the race whilst Pete was trying to figure out just what the hell the others were doing to be so fast!  The blue lane was the charm for everyone – all racers got their highest lap count and fastest lap on that lane while the red lane in general yielded the slowest and lowest lap totals.  When the checkered flew, Turbo had a three lap advantage over Benny with Tom only two laps further behind. 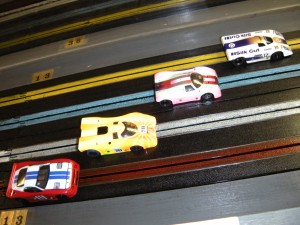 With Turbo joining the fray, we had 8 racers contesting for Pro honors.  Would anything 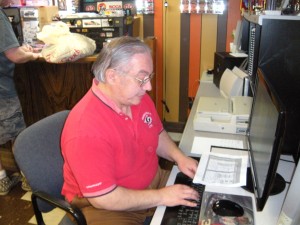 be able to stop Turbo from pulling off the infamous double?  And the answer was only Dr Pileggi’s amazing total of 61 laps in the blue lane… until that point, Turbo was headed for a sweep of Spec Stock.  Even with John’s run in blue, he was still only able to beat Turbo by less than half a lap!  Jonathan Reimels was 4 laps off the pace in third with Paul Ryer another 7 behind Jon in fourth.

With the Spec Stock cars stored carefully back in the pit boxes, it was time to break out the 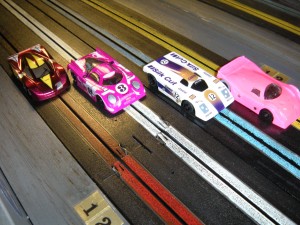 fast stuff.  If ever there was a perfect fit, it’s CMPM Modifieds on The Danger Zone!  Controllers were being tweaked, tires were being changed and temperatures were being taken with everyone in search of the perfect set-up.  Amidst all this action, Rick Carter, Jerome Burwell and Tom Kanan walked through the doors bringing the Pro field up to 11. 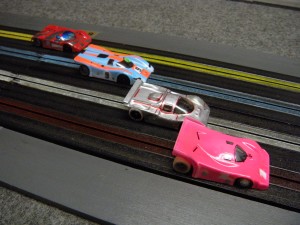 First up was the amateur contingent of O’Brien, Medeiros, Bussmann and track owner Leyro.  Benny has been the man to beat every time I show up to this venue; based on the glazed look in his eyes, he had to be the man to beat this time also.  Shur’nuff, Benny didn’t disappoint.  While his performance in the center lanes were competitive, Benny’s lap totals in the gutter lanes were amazing handing him a 13 lap victory over second place Turbo and a 20 lap victory over third place Tom Bussmann – both of which are no slouches on this track.  Pete Medeiros ended up fourth.

With Benny making the move-up to Pro, it was now his chance to pull off the elusive 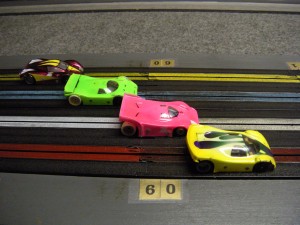 Thanks go to Benny and his wife for the food; always a highlight on the tour!  Once again, The Danger Zone lived up to its name.

We’re at LenJet Raceway in Modelville Hobby on May 10th for the last race of the season.  We’ll be racing Spec Stock on the Viper and CMPM on the Scorpion.  Set your GPS for Ashland, MA – let’s make the final race of the season a memorable one!

Don’t forget, the rules meeting will be occurring sometime over the summer months – it’s never too early for submitting rule change suggestions…