Danbury, Connecticut, March 22, 2014 – With Tom Bussmann threatening to tear down his track after this event, folks from all over the area made their way to Danbury, CT 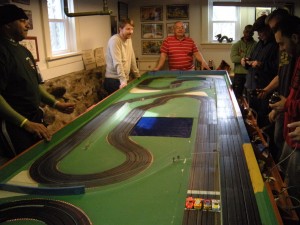 Getting ready for the G-Jet race

to participate in what could be the last race on the infamous Schlitzerland Raceway.  The MARC regulars were joined by our brethren from the Tri-State race group, namely Rick Carter, Pete Barclay, Jerome Burwell and Don “Mustard” Counts; somehow whenever these guys join the fray, there’s usually a lot of laughter throughout the event – you guys are always welcome!.  Thanks to the Tri-State folks, our attendance was up to 15 racers; 4 Amateurs and 11 Pros.

First up were G-Jets utilizing the popular themed Trans-Am bodies from the 60s, 70’s and 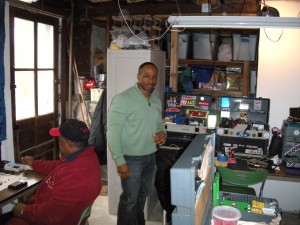 80’s.  An exception was made for Rick and Pete who used more modern Trans-Am bodies but since they were not contesting for points, the decision was made to let ‘em run (they both ran BMWs that just looked so damn cool, we had to let them run – JR).

With only four amateurs in attendance there was no need for a round robin race – this would be a pure 4 heat shoot out between the contestants.  Starting in the blue lane, Pete 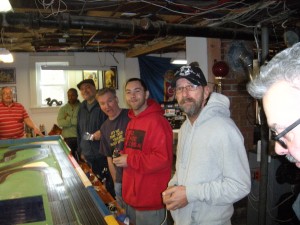 Medeiros made the most of his recently purchased out-of-the-box G-Jet by running a heat high 45 laps setting the stage for his first win in MARC.  Benny managed to make it close but he just couldn’t close the gap Pete created in the first heat.  Both Pete and Benny’s fast laps were in the 6.0 second bracket.  Congratulations to Pete for holding it together for the entire race. 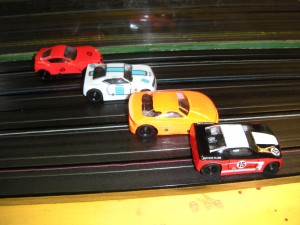 With 12 racers in the Pro division (11 + the move up from the amateur race), the field was divided into two groups of six racers based on the current point standings.  Once again Jonathan Reimels continued this year’s dominance of this division ending the race with a seven lap cushion over second place John Pileggi who narrowly beat John Reimels by 1 lap; these three drivers were the only ones to break into the 5.6 second bracket.  Pete Barclay drove his BMW to fourth place with Tom Gray finally breaking his jinx on this class with a nice 5th place finish.

With no additional drivers arriving, we had another 4 heat shoot out for the amateur super stock laurels.  Would Pete repeat?  Would Benny dominate this division as he’s done in many super stock races this year?  Or would Tom win his final race on his home track?  Benny started out hot but an errant pickup shoe ended his run for the victory.  Pete was fast (he had the fastest lap on 3 of the 4 heats) but Tom Bussmann used his home town advantage to the maximum taking the victory by 11 sections over a quickly closing Pete.  George did his best to stay with the fast three but just didn’t quite have it but if he’s anything like his nephew, he’ll be up to speed soon!

As winner of the amateur race, Tom Bussmann opted to join the Pro race bringing the field 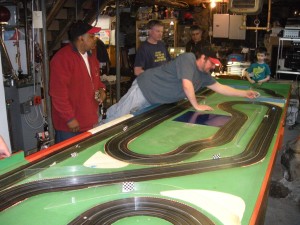 Director caught marshalling his own car - luckily it's practice...

up to 12 racers.  As in G-Jets, we divided the racers into two groups based on the season’s point standings so we ended up with two races of six racers per heat.  Pete Barclay dominated the first heat with a lap total of 304 laps and fast time in the low 3 second bracket (the computer had him at 3.055 but I suspect a rider was involved…).  Also having a good run was Rick Carter at 291 laps and Mustard at 286.  The second heat had both Jonathan Reimels and John Pileggi.  Would Jonathan continue his streak of super stock victories or would Dr P finally shake the monkey off his back and win the final super stock race of the season.  Well, it didn’t take long for Dr P to show that he was NOT going to go a full season of racing without a super stock win – he simply ran away with the race putting up a dominate performance with a lap total of 318 laps.  To put it simply, he stank up the show!  Jonathan limped home in second with a 307 lap total just nipping Pete’s performance from the first heat.   Paul Ryer coulda been a contenda but for a horrendous heat in white… 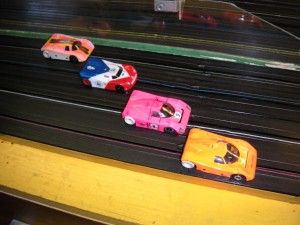 Thanks go out to Tom for hosting the event.  There’s rumors about a custom made routed track in the works that’ll replace the current layout but we’ll just have to wait and see what Tom’s up to.

As the season is starting to wind down, folks are looking at the point standings trying to figure out how to improve their lot in life.  While Benny is looking real good in the Amateur Championship division and Jonathan is looking good in the Pro Production division, the other championships are wide open, the next few races should prove interesting.

Next Race – Put away your G-Jets and Super Stocks, nuttin’ but Spec Stock and CMPM’s for the remainder of the season.  We’re at Benny’s The Danger Zone on April 12th so set your GPS for Yonkers NY.  Benny has one of the fastest tracks on the circuit!