G-Jets on the Shamrock Glen - a perfect match

LenJet HO Raceway located at Modelville Hobby in Ashland, MA. Twenty four drivers participated in this MARC event which was expanded to three race courses, the Bowman Champion, Bowman Shamrock Glen and Dan Decosmo’s 21st Century Clubman due to the high number of racers in attendance.  The decision was made to have the Pros and Amateurs compete for Super Stock honors on different tracks; the Amateurs on the originally scheduled Champion while the Pros competed on the Clubman.

G-Jets on the Shamrock Glen

The first event was BSRT G-Jets with Lexan bodies on the tight Shamrock Glen track. While fourteen amateur drivers were competing, it quickly came down to a tight race 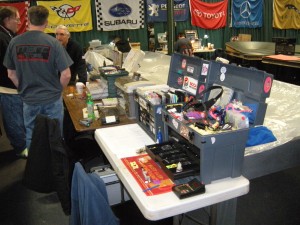 Getting ready for battle

between Mike Resnick and Peter Lentros with Resnick nipping Lentros’ by a little under a lap – Resnick scoring 198.22 laps to Lentros’ 197.24 laps.  It all came down to the yellow lane where Resnick topped Peter by one lap resulting in his one lap margin of victory.  Peter had a little compensation by turning the fastest lap time on the white lane with a 5.421 second lap while Resnick put up a very fast 5.445 on blue lane.  Honorable mention to Peter Medieros, a rookie who finished seventh in this event. Congratulations to Mike Resnick for a nice win.

Next up were the nine Pro drivers in attendance accompanied by Peter Lentros, the 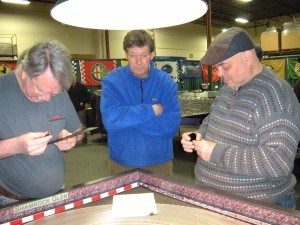 Rob watching the Tech Inspectors to keep them honest…

amateur race move up (Mike Resnick declined).  Much like the amateur G-Jet race, the Pro G-Jet race was a tight affair with Jonathan Reimels squeaking past John Pileggi’s G-Jet by less than a lap – 216.11 laps for Jonathan versus 215.18 for John. Once again the second place finisher had the faster lap time, this time Pileggi with a 4.932 on white lane versus Jonathan’s 4.979 on blue. The only other drivers turning in laps under 5 seconds were Peter Lentros with a 4.956 on white and Dave Muse with a 4.867 on yellow.  The battle between Jonathan and John would continue into the Super Stock race adding to the rivalry between these two drivers this year. Congratulations to Jonathan Reimels for another super win. 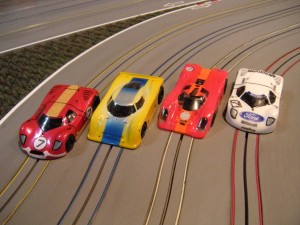 Amateur Super Stock on the Champion 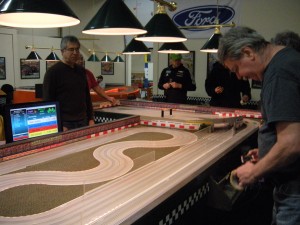 Sorry - No pictures from the Amateur race... you're stuck looking at another picture of the G-Jet race on the Shamrock Glen

with nine drivers.  Peter Lentros extracted a little revenge for his second place finish to Mike Resnick in the G-Jet race by beating Mike Resnick in the Super Stock event by three laps. Peter knocked out 302.21 laps to Mike’s 299.29 laps. Peter had a whopping 79 laps on white lane which was the highest lap total in this race as well as a blistering fast 3.312 second lap time on blue lane. Mike managed a 77 lap total on both white and yellow lanes and a 3.435 fast lap time on yellow. Once again honorable mentions go to rookie Peter Medieros Jr for his fifth place finish in this race. Congratulations to Peter Lentros for a very fine Super Stock victory.

Pro Super Stock on the Clubman

The Pro Super Stock event was raced on the Decosmo 21st Century Clubman Track.  What a day for Jonathan Reimels. Coming off his one lap victory over Pileggi in G-Jets, he did it again in Super Stock but this time with a very comfortable margin of victory of eight laps. Jonathan scored 345.24 laps with high lap totals in both blue and yellow lanes. Both drivers had very fast best lap times of 3.169 for Jonathan versus 3.134 for John. Whenever a driver sweeps the day’s event they deserve a great congratulations. Good One Jonathan. 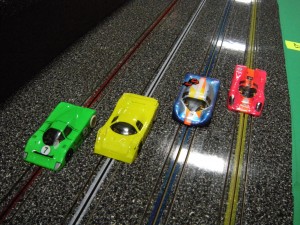 Thanks to Peter Lentros for hosting the event.  With the season high attendance of 23 drivers, LenJet Raceway is proving to be a MARC favorite.

Next Up – We’re at Tom Bussmann’s Schlitzerland Raceway on March 22nd.  We’ll be racing TransAm bodied G-Jets and Super Stocks.  If rumors are true, this could be the last race on this challenging track, Tom will be tearing down the track to make more room for “the kids”…