Ashland, Massachusetts, February 8, 2014 – The first race of the second half of MARC season found us at the LenJet Raceway (MVH).  The track selection for this event was the Purple Mile for MARC Spec Stock and the Viper for Compression Molded Polymer Modified (CMPM) – the two fastest tracks for our fastest classes.  Nineteen drivers showed up for the event so it was a full day of racing.  Great to see Durf and Erik Eckhardt back after an absence.  John Borge was back to race as was Don Hall, Tom Smith, and Mike Resnick.  Pete Medeiros attended his first MARC race.  Always great to see new 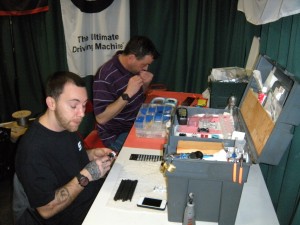 faces and I think we’ll be seeing Pete a lot the rest of the season.  Lastly we had the triumphant return of Tom Gray who was sidelined for the last three races getting his eyes adjusted.  Always fun to have a big turnout.  Now down to the racing.

First up was MARC Spec Stock on the Purple Mile.  After some discussion about how many lanes to run it was decided to use all eight.  They’re there and we were there to race so we used them all.  Practice showed you needed big motor down the main straight, handling to get though the fingers and the donut and good eyes to avoid the wrecks.   You needed to be in the low to mid 4 second range to reach the podium for this one.

Nine amateurs stepped up to the track.  It was the first race on this track for many in the 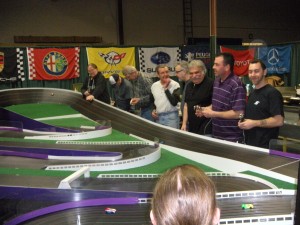 Racing was a tad hectic at times...

field.  Carnage was predicted, but the amateurs showed they could keep the cars on the track and ran a very clean race.  Hot lap times were in the 4.2 – 4.3 range.  New guys John Borge and Pete Medeiros did fantastic for their first time out finishing 4th and 5th respectively and John set fasted lap with a 4.227 second lap.  Unfortunately Tom Smith lost the motor in his car and had to drop out with 2 heats left.  Local Track knowledge prevailed as Peter Lentros took the top spot with 479.11 laps.  Close behind was Mike Resnick with 468.08 laps.  Don Hall showed he can build them as well as drive them finishing third with 458.42 laps.  Close considering we ran all eight lanes; an excellent race by the amateur group.

Next up was the Pro group which was bolstered with the return of Erik Eckhardt and Tom Gray.  Peter made the move up to bring the total number of racers to 11.  I don’t know what got into the Pros, but they did not run clean (understatement of the report – JR).  Things did settle down, but man, it was crazy out there for a while.  You needed to be under 4 seconds to get on the podium in this one. There was close racing throughout the

field.  You can really fly on the middle lanes.  Red is just an exercise in patience.  Stay on and stay out of trouble.  Reimels Jr has been hogging the podium this year and this race was no exception.  Jonathan finished first with 524.41 laps convincingly covering the rest of the field.  He also had fasted lap with a 3.874 second lap.  Club Director Paul Ryer pulled a rabbit out his hat and finished second with 514.38 laps and Peter Lentros showed his move up was no fluke finishing third with 508.01 laps, an improvement on his earlier race lap total.  Stez had a great race and would have finished second, but post tech inspection found the arm in his car had been balanced which is not allowed in this class.  Check those arms!  Racing all eight lanes was a challenge, but also a blast and the way this track needs to be run.

The Viper waiting for the action to begin

The second race of the day was CMPM on the wicked fast Brystal Viper track.  A 3 second or better lap time is where you wanted to be.  And, you had to be able to get through the esses.  The ones leading onto the straight with the lap counter proved to be especially tricky.  What you need for this track is practice and lots of it.  Also, people seem to be learning how to set these cars up since there were no burnt motors.

Once again the amateurs had a very clean race.  Very impressive considering this was the first MARC race on this track and we running our fastest class and for a couple of the guys this was their first CMPM race.  Mike 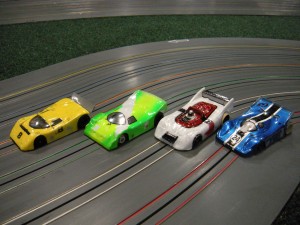 Resnick was a machine, consistently running 75 laps in each lane except for red and yellow.  As a result he finished first with 442.03 laps which was almost 50 laps ahead of second.  Speaking of second, Peter Lentros rolled into second with 395.37 laps.  Breathing down Peter’s neck was Durf Hyson who had a great run to third with 394.30 and fastest lap of 3.119.  One less off and Durf  would have had Peter for second.  Eric Handel found his happy place (my mind runs wild… – JR) with a smooth drive to fourth.  Pete Medeiros and John Borge had a good battle going on with Pete showing John what a bit more motor can do for you.  Great race by the amateurs, we need to get the pros driving this smooth.

Last race of the day was Pro CMPM.  Mike Resnick took the move up so there were nine drivers.  The Pro race was a bit wild.  Cars were flying but staying on the table for the most 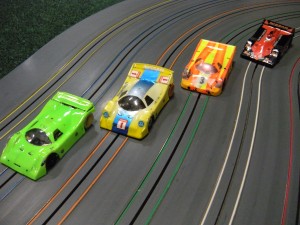 part.  I think they gave Tom Gray some bionic eyes.  He, Dr. Pileggi (top lap total with 92 in orange), and Rob Hayes were in a tight battle the whole race.  Once the drivers settled down, there was some tight racing though out the pack.  John Reimels had fast lap with a 2.706 lap.  Mike Resnick bettered his earlier lap total by 20 laps.  When all was said and done, John Pileggi took the top spot with 514.05 laps.  Was it the eye surgery?  Was it the joy of being back on the track?  Who knows but Tom Gray took a well-earned second place with 496.31 laps.  Rob Hayes finished third with 488.24 laps.  Director Ryer finished fourth, but post-race tech found the axle setup he switched to in yellow was too wide.  So, what did I learn?  First, don’t second guess yourself.  The car drove better with the original setup and probably would have given me a better lap total in yellow.  Second, use the tech block in your pit box dummy.  About the only thing you can get DQ’ed for in this class is width and I did.  Overall the racing was a blast.  Fast and Furious.  Great race on the wicked fast Viper.

It was a great turn out and an outstanding day of racing.  Hopefully every enjoyed the track choices for this event.  It was very encouraging seeing the guys who had been under the weather back at the track.  Hopefully this trend continues.  Next up will be Tom Bussmann’s Schlitzerland Raceway on March 8th.  We will run Super Stock and G-Jets.  The body choice for G-Jets will be Trans-Am and IMSA GTO/GTU bodies up to 1989.  Same requirements that we used at South Shore Speedway.  See you at the next thing!