A late Christmas present from Bill - an actual Ferrari 250 GTO

who braved the snow covered back roads of eastern Connecticut in route to Bill Bonsma’s Mighty Atlas Raceway – a Ferrari 250 GTO.  Yes, an honest to god, original Ferrari GTO.  Bill is in the process of installing a modern roll cage into this baby so the owner can take it out on the track at various vintage events.  Wow, risking this thing on the track is about as crazy as trusting Bill to install a rollcage into it (just kidding, Bill is an excellent fabricator – JR)!

In addition to working on the Ferrari, Bill still managed to get his Atlas track up and running flawlessly.  Whether it was the draw

Ferrari fabricator and host, Bill Bonsma, finally getting to work on his slot cars

of the Ferrari or just the chance to run on this track, we had three members from the Tri-State crowd join us for this race – Pete Barclay, Jerome Burwell and Don “Mustard” Counts.  It’s always fantastic when this crowd shows up, I hoped they enjoyed racing with us as much as we enjoyed hosting them.  The MARC guys really need to step up and reciprocate – how about we carpool to one of their events soon!  With only 2 amateur racers in attendance, the decision was made to combine the Amateur and Pro divisions into one race with the points being calculated separately.  With this decision made, we were ready to start the festivities.

First on the agenda were G-Jets, the first time that MARC ran this class at this facility.

After tweaking the voltage up to 13 volts, the cars came alive on this fast track and practice began in earnest.  As practice drew to a close and cars were being called to tech, the general consensus was the cars were a blast to drive on this track. When the checkered flag was flown folks gathered around the computer to see the results.  With the exception of Jonathan Reimels, who simply dominated the race, the racing was tight throughout the field, 3rd through 5th was separated by less than a quarter of a lap with 2nd place less than a lap ahead of this trio. 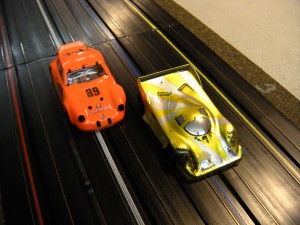 With G-Jets out of the way it was time to break out the faster cars, specifically MARC’s 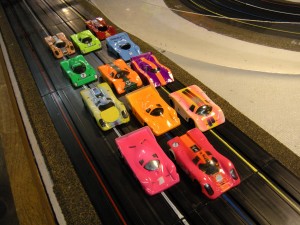 favorite class, Super Stocks.  The voltage was cranked to 18 volts and practice was underway.  The decision was made to shorten practice to 90 minutes versus the traditional 2 hours to accommodate Tom Bussmann who was under strict orders to be home before 2 PM.  This decision was embraced by the entire field so the Patriot fans amongst the crowd had a chance to watch the playoff game from the comforts of their own homes.  Would Dr Pileggi break out of his slump in the championship division?  Would Rob Hayes take his second win of the season to join Jonathan Reimels as repeat winners in this class?  Would track owner Bill Bonsma pull off the victory or would one of the Tri-State drivers take top honors?  With the computer only showing the individual heat lap totals, the answers to these questions remained a mystery until the last heat was run.  When all was said and done and the drivers from the last heat were unhooking their controllers, the overall results were finally unveiled on the computer screen.  Jonathan Reimels pulled off another event sweep, his third of the season.  This time the racing was much closer for top honors, Jonathan beating Dr Pileggi by only one lap.

Thanks go to Bill Bonsma for hosting the event – the track was perfect, the food was excellent and the Ferrari in the garage was simply amazing!  Thanks Bill, a truly memorable event.

Next up – On February 8th we’re at Peter Lentros’ LenJet Raceway located in the famous Modelville Hobby in Ashland, Massachusetts where we’ll be racing MARC Spec Stock on the Purple mile and CMPM Modifieds on the Viper.