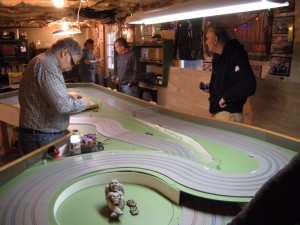 Trying out the new layout - challenging but nice rhythm

MaxTrax’s proprietor Paul “The Zoomin Human” Kniffen.  It was almost the Christmas that didn’t happen when the South Shore track design team miscalculated and came up an inch short on the new sections.  Mr Kniffen came to the rescues and new track sessions were delivered within a few days.  The Doors of the South Shore Speedway opened to a cold damp day with snow expected later in the day.  Drives slowly trickled in and soon there were fourteen drivers ready for some fun.  Benny Leyro made the trek up from Yonkers picking up Tom Bussmann on his way giving them the long distance award.  Thanks to Peter Lentros for bringing the parts store from Modelville.  Everybody was able to find the tires, wheels, and bodies they needed.  The drivers surveyed the new layout and they saw that is was

Outstanding field of TransAm cars - a real hit with the crowd

good.  Track power went on and the days started.

Power was set to 13 volts for the G-Jets.  This year the body choice was Trans-Am and IMSA GTO/GTU bodies up to 1989.  Peter had a great stock of Terry Flynn painted bodies for this in need.  In all there was a great mix of bodies and some outstanding paint jobs.  Practice showed that there is a bit more finesse needed to drive the track.  The long fingers have been replaced with some changing radius curves and chicane.  As practice went on, drivers smoothed out as they got the hang of the track.  Practice showed that the new layout is a few tenths slower than the other setup, but this could change over time as people learn the new track.  Yellow is definitely the hero lane with the highest lap totals.

Seven amateurs were on hand for the first race.  Paul Crosby made it to his first MARC 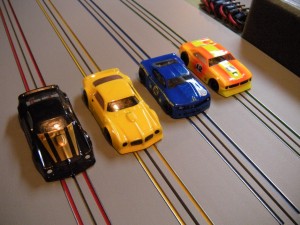 race of the season. We hope he is able to make more races in the future.  In the end Mike Resnick walked away first place with an impressive 222 lap total.  Second to fourth was a tight battle between Peter Lentros, Jimmy Colligan, and Tom Bussmann.  Each had the high lap total for the group in at least one lane.  After the last heat finished it was Peter second, Jimmy third, and Tom fourth.  Paul Crosby had a good showing in fifth followed by Benny and Eric Handel.  Fast lap was Mike Resnick with a 4.785 in yellow.  Durf was unable to attend and is on the mend.  We hope his back soon.

Next up was the Pro group which was a little light missing the presence of Dr. Pileggi, who was under the weather and Tom Gray is still on the mend after eye surgery.  Hope all is well with you guys.  As per the rules, the top amateur has the option of moving up to run in 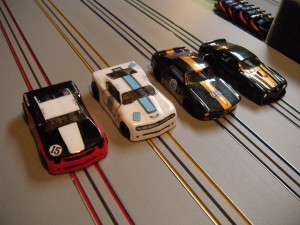 the Pro race.  Mike was ready to get on the track again and see if he could better his previous lap total of 222 laps.  In the field was the Reimels father/son combo.  Always a good battle between these two.  In the end, the younger Reimels took the win with an impressive 257 laps which covered second place by 18 laps.  Jonathan also had fastest lap with a 4.181 in yellow.  As in the amateur race, second through fourth was very close.  John Reimels took second with 239 laps.  Rob Hayes took third with 236 laps and Mike Resnick parlayed his move up to a fourth place finish with 234 laps bettering his earlier total of 222.  Stez, Paul Ryer (so much for home field advantage), and Dave Muse rounded out the field.  Look for the Trans-Am bodies again when we race at Tom Bussmann’s Schlitzerland Raceway in March.

Next up was the popular Super Stock class.  Due to the changes in the layout, setups from 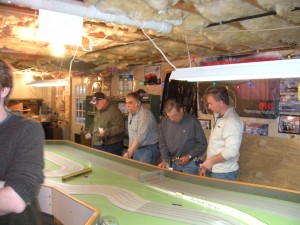 last year may not be the setup for this year. Drivers fiddled and tested to find the right combination to deal with the new configuration.  Baked ham and turkey are the traditional fare at South Shore Speedway, but with the iffy weather it was decided to go with something that Ryer family would eat if turnout was low.  So lasagna, etc was served while practice was going on in the hopes of lulling the drivers into a food coma.  It almost worked…  In the interest of getting done early to avoid the coming storm, practice was shorted by a half hour and there would be no move up from the amateurs.  Mike Resnick and Stez were done for the day, but Vi Tamburo was able to address his heating system woes and join us for the second race of the day. As with the G-Jets, Super Stock was a bit slower with the new configuration, but what a thrill ride.

Six amateurs took to the track and the race was on.  Eric Handel miscalculated on setup, but the seasoned Rob Hayes stepped in and with some sage advice and help to keep Eric in 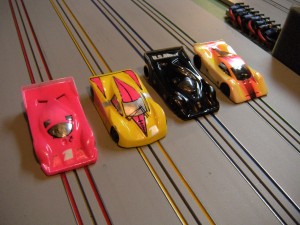 the race.  The theme of the day seemed to be one driver who figured it out and drove away from the field and this race was no different.  Benny Leyro stormed though the field taking first place with 361 laps.  Stellar run Bunny! His was the high lap total of the day.  Benny was wishing we kept the amateur move up.  He definitely had something for the Pros.  28 laps behind Benny Peter Lentros took second place with 333 laps.  Jimmy Colligan took third with 325 laps.  That was 2 third place finishes on the day for Jimmy.  Nice Job.  One lap behind was Paul Crosby in fourth which was a great finish considering Paul build his car during practice.  Tom Bussmann and Eric Handel rounded out the field.  Peter Lentros had fastest lap with a 2.757 in yellow.

Last race of the day was Pro Super Stock.  Would it be another Reimels one-two finish as 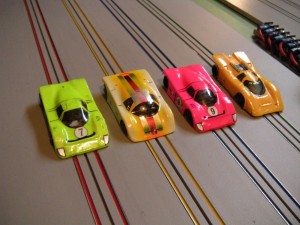 seems be norm lately?  Was Vince warmed up?  Was anyone focused on the snowflakes falling outside?  We would see.  The Pro Super Stock race proved to be closer than the Amateur race.  Paul Ryer and the Remiels team swapped high heat totals staying a few laps of each other.  Blue was the deciding factor where Jonathan put up 94 laps for a total of 355 for first place.  Paul Ryer was 2 laps behind in second 353 laps and John Reimels was 4 laps out of first to finish third with 351 laps.  Rob Hayes came home fourth followed by Vince and Dave Muse.  Vince Tamburo had fastest lap with a 2.763 in yellow.

Another successful and enjoyable event at the South Shore Speedway is in the books.  The 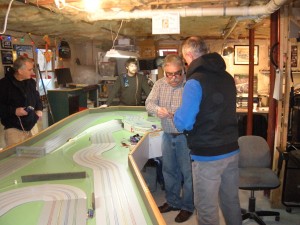 new layout was well received and gives us two track options at South Shore Speedway.  Thanks to everybody for making the trip and in the nasty weather and we’ll see you next time at Bill Bonsma’s Mighty Atlas Raceway for the first race of the new year and the half-way point of the MARC racing season.