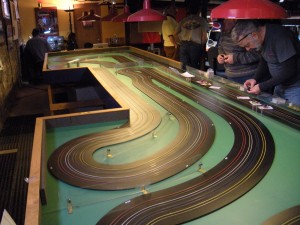 returned to Catfish International just seven months after our March 2013 inaugural on the new, 84-foot Brystal Catfish course.  With each new class run, there are new records to set.  The track feels fully seasoned now, and continues to receive rave reviews.  Bryan Henden, you have done something truly special here, and we thank you.

We were very pleased to see 16 guys turn out for this one, as it was the Veterans Day weekend, and folks certainly had lots of other places to spend their entertainment dollars.  Again, very fortunate to have a few Southerners in the house, with Jerome Burwell and Mustard Counts representing the Garden State, and Benny Leyro and Billy Bonsma representing 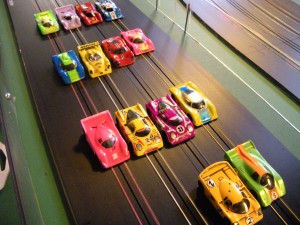 the Empire State and Western Connecticut respectively.  Thank you for spending your day with us!  Two fast classes on the day — MARC Spec Stock, and Compression Molded Polymer Modified – and the Southerners love the fast cars, uh huh, uh huh.

We had four amateurs in the house, and in the Amateur MARC Spec Stock program, Mike “The Machine” Resnick was victorious, with high lap total on three of the four lanes.  Peter Lentros, Mr. Mayor, was second, followed by Oh Jimmy Colligan, and Benny Leyro, who were just two laps apart.  Fast lap was Mike’s, at 4.404.   Despite my worries about cars vaulting the walls, the drivers showed restraint, and it was a relative rarity.

“The Machine” elected to move up into the Pro program, where he found another gear, 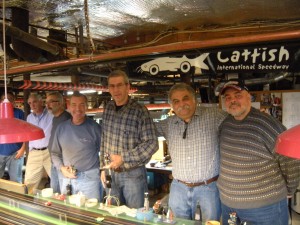 The amateur field ready to contest in Spec Stock

dropping his best time further, to 4.221.  His steady approach, and trouble-free run, netted him third in the (Pro)gram.  Dr. John Pileggi ran another blindingly fast race, with high total on three of the four lanes, taking the top spot.  Another great car, and another great drive from John.  His new track record for MARC Spec Stock?  4.029 seconds.  That’s 21 feet per second, y’all.  Eleven laps back in second was Catfish Sr., and the venerable Reimels Sr. was fourth.  Jonathan Reimels had a very strong car, and would have been right up at the pointed end of the field, but he threw an armature winding in the first segment.

Practice for the polymer cars followed, and a few did manage to find the floor, but not 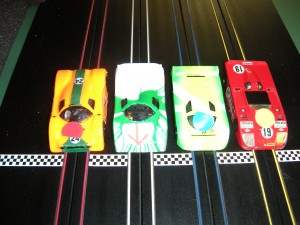 nearly as many as I’d feared.  Some of these guys can really drive!  It looked like the CMPM machinery would probably settle at around a second/lap quicker than the Spec Stock cars.  They looked ridiculously fast.

Pizza from Otto’s, and apple, and chocolate bourbon pies from Petsi arrived, and then it was time for the Star Spangled Banner.  Our performers were Berklee students Edmar Colón, soprano saxophone, from Coamo, Puerto Rico, and Tabari Lake, upright bass, from St. Thomas, in the U.S. Virgin Islands.  A beautiful rendition of the anthem, with Tabari bowing the strings throughout.  Big applause.  And then, at Jerome’s suggestion, they followed this up with a hot, improvised version.  Too much! 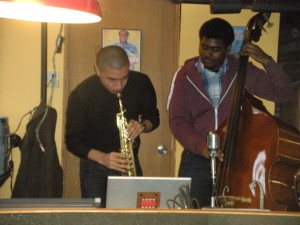 With the track power back on, some devastatingly quick cars, several sounding dangerously low, as the boys tried to ring every last tenth out of their tiny steeds.  I made sure the fire extinguisher was nearby.

In the Amateur program, Benny resurrected his mojo, with three strong lanes, and a tough go on Red, all of it good enough for second, just eight laps back of victor Mike the Machine.  Peter Lentros had one strong lane, and a rough time of it on the others, for third.  Oh Jimmy never quite believed sufficiently in Gauss’s Law, and how it applied to his car, so he still had a good-looking body at race’s end.

In the Pro(gram), Jonathan Reimels had a rewind, and thus was unlikely to throw a wind. 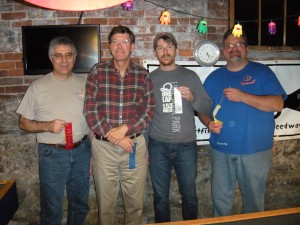 He took advantage of this to nip the absurdly fast Billy Bonsma by a mere half a lap, for third place, 321.38 laps to Bill’s 321.19.  Taking top honors was Catfish Sr., running a BSRT G3-R CMPM kit car, with 357.23 laps.  Second, 14 laps back, was the estimable Dr. John Pileggi.  Jonathan, Rob, and Bill all seem to have broken 3 seconds, which is mighty quick over 84 feet of roadcourse, including 15 turns.

At race’s end, we ran a raffle for a new-in-box, 1/32 Fly Ferrari 512S Berlinetta, with proceeds going to help offset the raceday’s expenses.  Naturally, John Pileggi, who’d been initially reluctant to enter, saying, ”I’d probably just put it on the shelf and look at it,” won.  And will now be just looking at this little beauty for as long as he wants!

Our huge thanks go to BSRT for providing race prizes, Dave Muse for his usual, 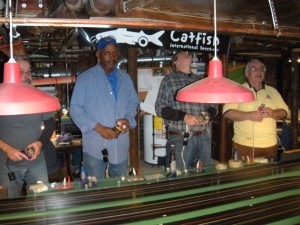 Jerome Burwell getting ready to do battle in the Pro CMPM race.

yeoman work on our race management tech, Ultimate Slot Car Wife Gretchen Adams for all she does to make the day great, Edmar and Tabari for the music, my housemates for putting up with me and my strange hobby, and to all you crazy people who made the trip to Cambridge, to race again at Catfish International.  If you haven’t been here yet, please know you’re truly welcome, and we look forward to meeting you!