Pete, Re-Pete, Tom and Benny all walk away winners

Yonkers, NY, March 9, 2013 – The Friday before the race at Benny Leyro’s The Danger Zone, the northeast was once again under siege from the weather with snow and high

You have just entered The Danger Zone...

winds battering both the coastal and interior regions of the northeast.  However, as predicted, the storm cleared out over night leaving nothing but sunny skies and warm weather on Saturday – for once this season, the weather gods were on our side…  On Saturday, with the snow covered roads hampering travel, racers staggered into Benny’s facility all morning long leaving some folks with little or no practice time.  For those not familiar with The Danger Zone, Benny has built himself a fast track perfectly suited to the Spec Stock and CMPM Modifieds that we using for this event.  Set the car up to handle the infamous squiggles and then put the hammer down for the rest of the lap – catch a breath when you can – wow.  When Pete Barclay and Jerome Burwell rolled into the raceway, we knew we were in for a good time – it’s always great to 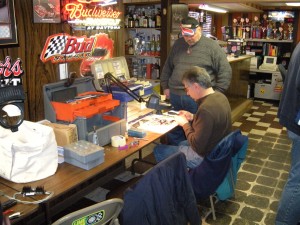 see folks from the NY / NJ area join us at a MARC event; thanks go to both Pete and Jerome for making the trip.

When MARC incorporated HOPRA’s Spec Stock class into our line-up last summer, we keep the class open to all participants, both amateur and pro.  We also specified the use of Lexan bodies – hard-bodies are for T-Jets and toy cars, not highly tuned race machines (sorry for the editorial comments, I just couldn’t help myself – JR).  With a few last minute arrivals, we had 11 racers ready to go as the practice session drew to a close – the three amateurs were up first to be followed by the eight pros in attendance.

MARC regulars, Benny Leyro and Peter Lentros were joined by Troy the Puppy, a newbie 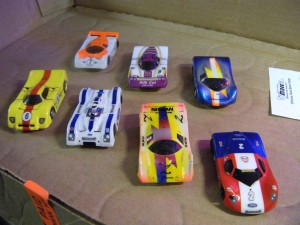 With good looking cars like these in Spec Stock - who needs hard-bodies...

to MARC events.  By the end of the race, neither Peter nor Puppy could overcome a fantastic drive by host Benny Leyro who set top lap total in each lane and a blistering fast lap of 4.707 seconds – way to go Benny especially considering half way through the race everyone was convinced that Benny was heading for a meltdown (well, his CAR was heading for a meltdown), the air was filled with that lovely smell of burning armature.  But, much to everyone’s surprise, the car not only finished but went on to the Pro event and finished there as well!  To make Peter’s day worse, post race tech inspection revealed that his car was equipped with a balanced arm – a no-no in Spec Stock.  That infraction earned Peter a DSQ – the first one of the season.  This moved Puppy up to second.

With Benny joining the Pros, the field was full at nine drivers.  Tom Kanan, who entered the event with the promise of borrowing Peter Lentros’ car, had to do a quick rebuild to 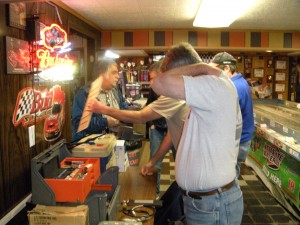 Just what the hell should I be running - confusion over the Spec Stock rules continue...

install an unbalanced arm before he could race.  When the race started, Pete Barclay showed that he didn’t need practice time (he showed up just as the track power was shutting down), he drove one of the most consistent races I’ve seen in a long time – 58 laps apiece on the two center lanes and two 56 lap heats in the gutter lanes.  This gave him a four lap margin of victory over Tom Kanan (I guess the unbalanced arm didn’t hurt performance).  John Pileggi finished third with Benny in fourth, whatever caused the earlier heat concern had long since departed.  Stez finished 5th followed by Paul Ryer, Tom Gray, John Reimels and Jerome Burwell. 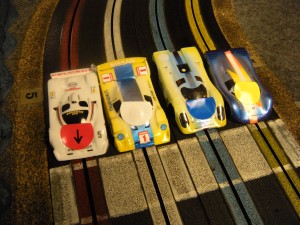 The line up for the CMPM Amateur event

time remaining.   With the departure of Troy the Puppy, the amateur field was still at a lowly three.  Jerome Burwell was under time pressure so he elected to run with the amateurs filling out the field nicely.  Tom was armed with the ultra-fast car he ran at the Nats – he was dying to show the world his performance there was no fluke.  And no fluke it was as he walked away from the field setting top lane totals for each lane as well as setting fastest lap.  Benny tried to keep Tom honest but he just didn’t have the horses or the handling to stick with him for more than a lap or two.  Peter Lentros did well in his first CMPM race to finish third with Jerome finishing fourth.

Making it to the Pro race was exactly why Tom entered the event in the first place; he was 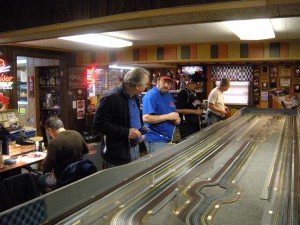 bound and determined to complete the sweep of the class.  That was until he ran into the buzz saw of Pete (re-Pete???) Barclay who completely dominated the race.  Tom managed a very competitive second but Pete was just the cream of the crop.  Tom Kanan pushed Tom hard for second but came up three laps short.  TK certainly won the “good luck” award – in his first heat he got caught up in a crash that caused the body to come off his car and he lost a bunch of laps putting everything back together.  Before the end of the heat, the power supply mysteriously shut down causing the heat to be re-run.  Now that’s luck!  John Pileggi finished fourth followed by John Reimels, Paul Ryer and Tom Gray.

Thanks go out to Benny, not only was the food fantastic but he had to clear the snow off the driveway and street so everyone would have room to park.  It was much appreciated Benny, thanks for hosting!

Next up we’re at Rob Hayes’ Catfish International Raceway on March 23rd.  We’ll be racing Super Stocks and G-Jets with Lexan CanAm bodies.  For those you haven’t heard, Rob has a brand new Brystal track; it’s a fantastic layout that captures much of the rhythm of his old MaxTrax.  We had a shakedown race last week, come with tall tires, you’re gonna need them for the Super Stock race!