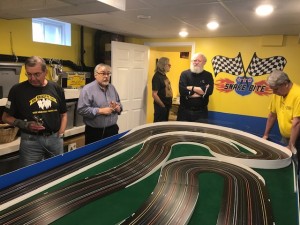 Ryan’s wife still lets him live here despite his slot car addiction) to run on Snakebite Raceway.  While Rob Hayes charged his Tesla, the raceway still managed enough power to propel a days’ worth of racing. 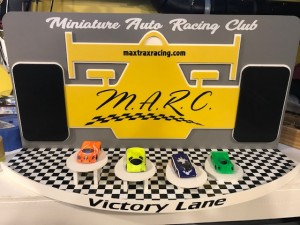 Starting the day Pros and Sportsman ran together for Spec Racer as is the norm for MARC. After more track calls than any of us care to admit (6 lanes – what more needs to be said) Greg Burstein took the win with a brand-new Fusion. The Fusion is proving to be a formidable car in Spec Racer. Three laps down was Ryan using a well proven Viper.  Paul Ryer put up some good clean segments, but traffic and track calls kept him back a few laps in 3rd.  Making a rare appearance in 4th was Bill Bonsma 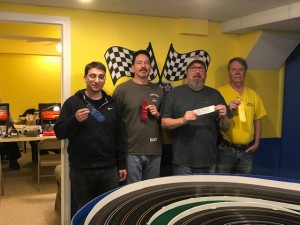 (running as a sportsman).  The rest of the field had fierce battles all the way to position 14.  Wait, the racer in position 14 is 2 years younger than his finishing position!  It was also his first official HO slot car race – William Bonsma, age 12 was showing he can race these little cars as well as his RC cars and was later heard he can’t wait to race again!  I think he’s hooked!  And totally welcome to come race with us any time. Can’t wait for him to be beating his dad and the rest of us! Great job racing and marshaling too William. 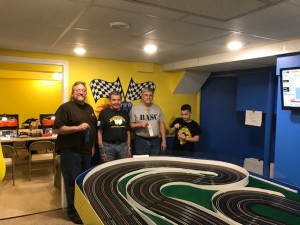 After some Lasagna and salad for lunch (thanks Luann) and some practice, the time for super stock sportsman was up.  Taking down the Sportsman SS win after a fairly clean 6 lanes of racing was “Bill my kid can’t beat me Bonsma” followed by Jim Colligan, Terry Ayer, and William Bonsma (in 4th!).  Followed by Hal Pierce in 5th, Mike Tiffany in 6th and John Schoenfeld in 7th. Nice race guys, you always run clean on Snakebite 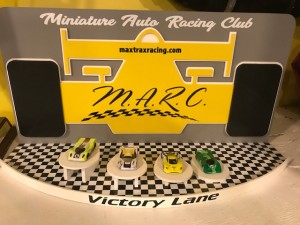 Last but not least was CMPM for the MARC pros.  With 6 pros we decided to run the center 4 lanes to allow for adequate number of Marshals and hopefully a little less hectic race. CMPM cars on this track are blindingly quick!  About 2 minutes into the first segment on the track Ryan’s Viper lost a guide pin, it pulled out in a backwards slide!  A quick dash to the pits (another home track advantage) and a new pin was installed leaving Ryan down about 24 laps…looked pretty hopeless to come back out on top.  Rob Hayes in the meantime was battling with Jim Mac for top position. Tom Jahl was looking pretty stout meanwhile Paul Ryer was having havoc with traffic and Tom Gray seemed to have some issues of some kind.  Ryan pressed on with every lap being a 110% effort putting up 458 lap total.  With two more heats to go Ryan could only watch as Rob and Jim rotated back into the race to try and take top honors. It wasn’t to be as Ryan’s total was enough to fend off Rob at 442, Jim at 439, Tom Jahl at 435, Paul at 432 and Tom Gray in 6th at 414. Ryan said his CMPM car was going into hibernation for this year’s Nats

Thanks to everyone that attended and hope to see back here next year.