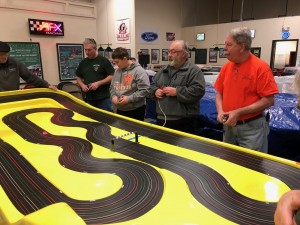 Racing on the Tubbie - Such memories...

Hog’s Day event hosted by Peter Lentros at his awesome LenJet Raceway.  LenJet tends to draw the crowd, in part because it’s centrally located within New England but also because it’s just an awesome place to race.  We dusted off Peter’s 5-lane Tubbie track for the T-Jet race (we really need to use this track more often, it’s so much fun to drive – JR) followed by an IROC Dire Wolf race and the Gravity race on Peter’s fast Viper track. 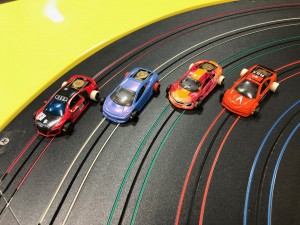 As usual at a GRoNE event, the first race of the day was the T-Jets, this time on Peter’s Tubbie.  Peter’s Tubbie is a bit unique in that it’s surfaced with a 5 lane track made by Brad Bowman, the 5 lane configuration increases the lane spacing allowing for some nice side-by-side racing.   Rob Hayes once again showed his T-Jet prowess by beating Paul Ryer to the finish by 3 laps.  Track owner Peter Lentros finished third followed by John Reimels in fourth.  Racing T-Jets on this track brings back memories of Friday nights at the commercial raceway in Quincy, MA; 48 years later, the rhythm is still the same, but the cars are just so much faster.

We’re getting close to creating our third class for GRoNE events, Dire Wolves.  Most members have taken advantage of Peter’s efforts to kick off this class and purchased the kits he bought from RPMS.  By our next event, we should have enough cars so most racers can run their own car or borrow one from folks that have built more than one.   For this race, we ran the event IROC style with three cars built with the N20 motor out of an AFX Mega G+ car, the 4th car using an M20 motor.  Racing was extremely close with the top eight finishing within three laps – now that’s racing!  Peter Lentros took down the victory followed in close succession by Donny Hall, Dave Muse, John Reimels, Tommy Gray, Paul Ryer, Mike Tiffany and Rob Hayes.  I really look forward to growing this class as an easy way for folks to experience the wonderful world of gravity racing. 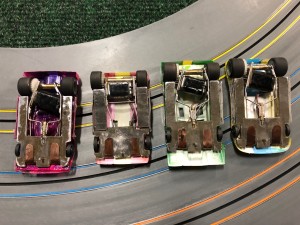 Saving the best for last, Gravity cars were up next on the Viper track.  With Rob opting out of the event, we were down to 11 racers, but still enough to run all six lanes.  Donny Hall ran a masterful race beating the field to the finish by 4 laps.  Paul Ryer finished second in a tight scrap with Tom Gray.  Dave Muse finished a very clean fourth.  It’s GREAT to see Donny, Tom and Dave at the top of the field, they’ve been solid members of the GRoNE graviteers since the 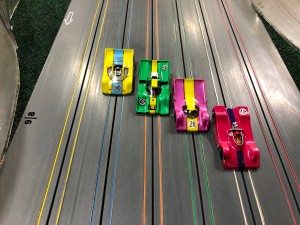 group’s inception; for all three to be on the podium is just awesome – racing is getting tighter, as we all get a handle on Gravity Racing.  Mike Tiffany nipped John Reimels for 5th with track owner Peter Lentros in 7th.

Thanks to Peter Lentros for hosting and thanks to all participants for spending their Saturday racing brass cars.  I’ll put out feelers for a race the end of March / early April – anyone interested in hosting, let me know.