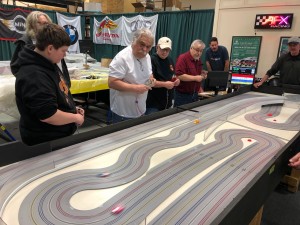 Practicing on the Bear

its biggest crowd of the season; but LenJet usually does draw in the participants.  This despite the super warm weather that hit the New England area over the weekend.  All 22 racers ran together for the Open Weight class on the Bear but, for the second race, the Sportsman ran Super Stocks on the Purple Mile whilst the Pros ran CMPM on the Viper. 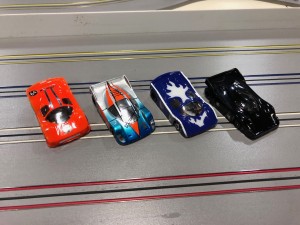 Rob Hayes has been on a wicked winning streak as of late, and the Open Weight race was no different.  Rob set high lap count on all four lanes winning the race by a huge 11 lap margin.  The dynamic duo of Ryan Archambault and Dan Decosmo, both running cars out of the Archambault pit box, just couldn’t match Rob’s pace and finished 3rd and 2nd respectively. Host, Peter Lentros, finished 4th, followed by the “Johns” – Reimels 5th and Stezelecki 6th.  Top Sportsman, Hal Pierce finished 7th 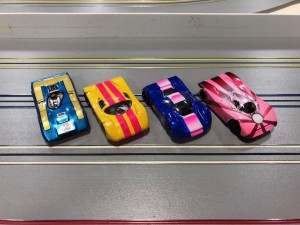 overall beating fellow Sportsman, Donny Hall by sections to take the top spot for that division.  Terry Ayer grabbed third beating O’Jimmy Colligan and John Schoenfeld by a few laps in a tight battle for the Sportsman podium. 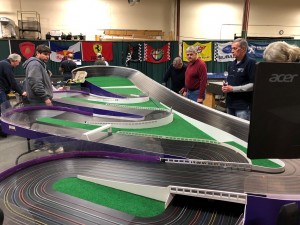 With Tom Smith and John Schoenfeld taking the afternoon off to enjoy the warm weather, we had 9 Sportsman battling on the Purple Mile with Super Stocks.  With the Pros off running their own race, the group decided to run only the four center lanes so there would be enough marshals to conduct the race.  Cody Pare, a local youngster that’s been making a name for himself at Modelville Hobby, borrowed a car from Ryan Archambault and put on quite the show.   Laps on the Purple Mile are long, so winning the race by 24 laps is simply amazing.  If Cody ever decides to run the entire MARC circuit, he will be a force to be reckoned with.   Finishing second was Donny Hall followed by O’Jimmy Colligan and Terry Ayer.  The Sportsman division has been a real hotbed thus far this season, the competition has been close throughout the field. 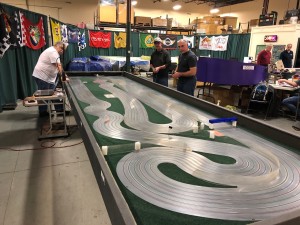 Pros running CMPM on the Viper

It was great to be running fast cars on the Viper again, when you hit the right set-up, racing on the track is breath-taking (and exhausting).  And clearly Ryan Archambault hit the right set-up.  Since we were running just the center four lanes, it’s tough to compare lap totals from previous races however, the center four lane total from John Pileggi’s record run last year was 391 laps, Ryan’s lap total on the same four lanes this year was 427 laps!  Amazing.  Coming home second was John Reimels with 404 laps followed by Peter Lentros in third with a 395 lap total all beating John Pileggi’s center four lane total of last year.   Maybe there was less carnage because there were only four cars running but clearly the track was fast – very fast.  Coming home in fourth was Rob Hayes followed by Dan Decosmo in fifth.

For the event, Ryan’s stable finished 1st, 3rd and 5th in CMPM, 1st in the Sportsman SS race and 2nd and 3rd in the open weight class – not a bad day for Team Ryan.

Speaking of Ryan, we’ll be at his Fast Five Raceway on February 8th where we’ll all be racing the Spec Racers class for the 1st race followed by Super Stocks for the Sportsman and CMPM for the Pros.  All races will be held on Ryan’s fast Snake Bite track.

The GRoNE group will be back at Peter’s LenJet facility on February 1st for our 2nd Annual GRoNE Hog’s Day event racing T-Jets on the Tubbie, Gravity cars on the Viper and Dire Wolves on either the Tubbie or the Viper (we’ll decide race morning).