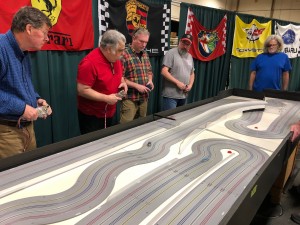 Racing T-Jets on the Bear

starting our 5th season of gravity car racing in New England, and for that I thank all the die-hard graviteers who’ve helped gravity racing take root in the crowded New England race calendar.  Special thanks go to the two long haulers of the day, Mike Tiffany and Tom Bussmann making the trek up from the New York border.

First up were T-Jets on Peter’s Bear track.  In what is usually a tight race, Rob Hayes had a run-away victory beating Peter Lentros to the finish line by a whopping 5 laps.   It’s interesting to note that Rob’s victory was due entirely to his performance in the two gutter lanes where he bettered the field by two laps in the red land and three laps in the yellow lane.  Paul Ryer finished third followed closely by Donny Hall in fourth. 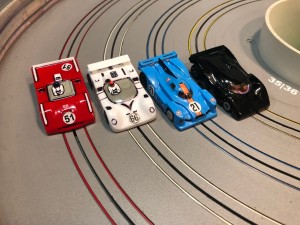 A pack of Dire Wolves

After a very successful outing in November, we once again ran a set of Dire Wolves in IROC fashion with the desire to land on a configuration so we can add the class to our future events.  We used Roger’s latest v2 chassis, two cars with the M20 motor and 2 with N20 motors from the latest AFX cars.  At the conclusion of the event, we decided to go with the AFX N20 motor in the v2 chassis; controllers do not need choke and the motor should last forever – two important factors for an entry level class – oh, yeah, in addition,  they’re a blast to drive!   Peter will be ordering kits from Roger, once we get them, we’ll start running this class at our future events.

The race itself was closely fought with only 1 lap separating the top three positions.  But, as is usually the case, raw talent was the deciding factor (as author of the report, I get to write history – JR) as John Reimels took down the win by 7 sections over Paul Ryer with Peter Lentros one lap behind in third.  Rob Hayes and Donny Hall had quite a battle for fourth with Donny beating Rob by sections for the last spot on the podium. 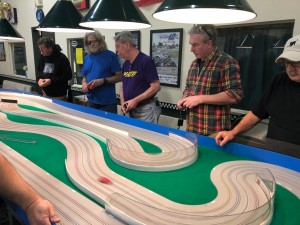 Racng Gravity cars on the Champion

Now for the class that all the graviteers were waiting for, the Gravity Race.   We had nine entrees, all M20 motored anglewinders of various sorts – seven with center hinges and two with more traditional main rails necked in at the front plate to allow more chassis flex; two used pick-up shoes with the remaining cars using wipers.  Gutter lane extraordinaire Rob Hayes won the event with a heavily modified Scott Terry pick-up shoe design, Rob adding the center hinge.  Rob’s mastery of the 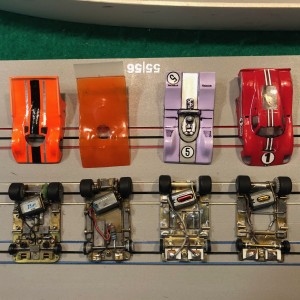 gutter lanes once again helped him to victory.  Peter Lentros took second in an Al Thurman center-hinge anglewinder followed by John Reimels (I guess raw talent just wasn’t enough… -JR) in one of his anglewinders for third.  Mike Tiffany made his long trip worthwhile taking down 4th in a non-center hinged car.

Thanks go to Peter Lentros for hosting the event and to all the folks for attending in this busy holiday season.

Ideally, I’m trying to schedule an event in February, if the Patriots lose in the early rounds of the playoffs, I’m thinking Sunday, February 2nd might work (Super Bowl Sunday).  We’ll keep the day relatively short so we can still be home to watch the Patriot-less Super Bowl.  Of course, if the Pats do make it to the Super Bowl, we’ll find an alternative date (we’ll be in full party mode all day long – this stuff never gets old).  Let me know what you think (about the February 2nd date – not the Patriots).