Hingham Massachusetts   November 23, 2019   – Eight Graviteers made their way to Hingham MA, to join Paul Ryer at his South Shore Speedway on November 23rdfor the 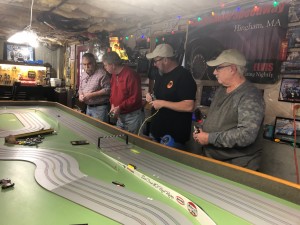 first GRoNE race of the season.   On docket were Super Stock T-Jets, Gravity cars and an IROC race using Roger Porcelli’s Dire Wolves in hopes of running them as a separate class in future events.  But I’m getting ahead of myself, first, over a nice cup of coffee, we agreed to start the day with T-Jets to get the ball rolling.

The advancements in T-Jet racing continue at a furious pace which is amazing considering the cars have been around since the 60’s; ya think we’d be running out of tuning tweaks by 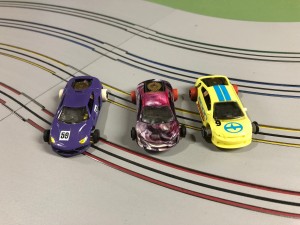 now.  Super strong ceramic magnets and sliding front ends coupled with an ultra-low ground clearance and Dash armatures appears to be the new hot recipe sweeping the nation and this also proved to be true on Elvis as the cars flew around the track – no more tiptoeing through the donut!   After an hour of practice, everyone had their cars figured out and we were ready to race.  Paul Ryer set a fast pace garnering top lane totals in 3 of the four lanes including the tight Green lane.  He took down the win by two laps over Cyclops Racing’s Mike Tiffany and John Reimels, who were separated by sections for second and third respectively.  O’Jimmy Colligan grabbed fourth a further two laps behind.  These top four drivers probably have more laps on this track than the rest of the field combined proving once again that home field advantage is alive and well in Hingham.  Congratulations to Paul for an awesome race. 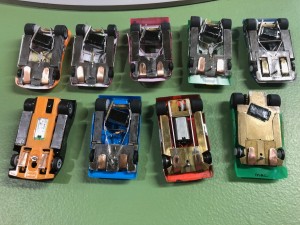 A wide variety of cars making up the Gravity Car field

With the voltage down to 18 volts, it was time for gravity car practice.  We had two in-lines, one sidewinder and six anglewinders of various vintage all competing for top honors.  We even had one car with an N20 motor, and two cars using pickup shoes versus the more common wiper set-up.  Ahhh, the joys of Gravity racing where variety rules the day.  Racing was close throughout the field with the top four separated by only 3 laps.   Taking down the win was John Reimels using one of his anglewinders, 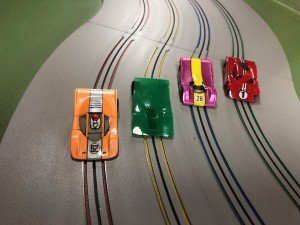 followed by Peter Lentros in a Landshark anglewinder, Paul Ryer in a home-built sidewinder, and Mike Tiffany in another anglewinder built by John Reimels.   This is probably the closest racing we’ve had to date for a GRoNE event, an excellent sign of health for the class here in New England. 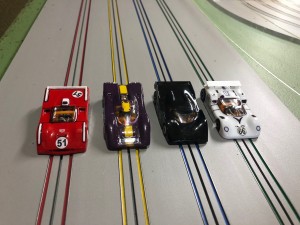 A pack of Dire Wolves

After lunch, we gathered the pack of Dire Wolves for some IROC racing.  We had two of the older v1 chassis both with the M20 motor, one new v2 with an M20 motor and one v2 with an N20 motor out of a Mega G+ car.  What was immediately apparent is the v2’s improved handling over the older v1 version – smiles all around after running the v2.  Since we were running IROC style, the cars stayed in the same lane throughout the event, for those interested in looking at the differences in performance, the v2 with the M20 motor was in the Green lane, the v2 with the N20 motor was in Blue and the two v1 cars were in Yellow and Red. 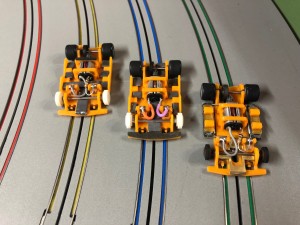 The race was another close affair with John Reimels beating Paul Ryer to the finish by 1 lap, John running better in the gutter lanes with Paul mastering the Blue lane.  Donnie Hall took down third place followed by Peter Lentros and O’Jimmy Colligan battling for fourth with Peter beating Jimmy by sections.  Post-race consensus was the v2 Dire Wolf is a fun car to drive.  We’re going to update the two v1 cars to the newer v2 specification, one with an M20 motor and the other with another Mega G+ N20 motor.  These will be used for another IROC race at our next GRoNE event.  If all goes well, we’ll add the class to our future events.  The car is easy to build providing an excellent way to get into Gravity racing!

I would like to thank Paul Ryer for hosting the event and to all those in attendance for helping to keep Gravity Racing in New England alive and well!  I know the HO scene in New England is very active with the various groups doing their own thing, but with your help, we can squeeze in some Gravity Racing on a regular basis.

Our next event will be at Peter Lentros’ LenJet Raceway for our traditional New Year’s event on Saturday, Dec 28th.  We’ll be racing Gravity cars and the IROC Dire Wolf race on the Champion with SS T-Jets on the Bear.

Looking ahead on the calendar, we’re planning our GRoNE Hog’s Day event for some time in late January / early February.