Yet Another Awesome Venue in New England

Windham, New Hampshire  November 9, 2019    It was a cold and sunny day in New Hampshire for the inaugural MARC race at the Ralph Spoilsport Speedway.  Eight racers were in attendance, five Sportsman and three Pros.  Most of the pros were tied up in England at the Derby HO Racing Club Lemans event.  Team Gurney won the gold.  Congrats to them for a great win!

In the drivers meeting it was decided to run Sportsman and Pro together for both races.  During practice Hal challenged the other racers to beat his high mark on the wall where his car hit.  First race was Spec Racers.  We had great racing with heats seeing drivers go neck and neck for multiple laps only to see the squiggle claim one of them.

For the Pros, Jim Macartney set the pace followed by Tom Gray only three laps behind the lead and Tom Jahl locking up third.    Jim Mac and Tom Gray were the only racers going over 100 laps in a heat.

For the Sportsman Mike Tiffany lead the field, followed by Terry Ayer, then Jim Colligan, Hal Pierce and Dave Muse.

We had a 30 minute lunch followed by a shortened practice.  Yes Paul, the practice was shortened by vote.  Jim 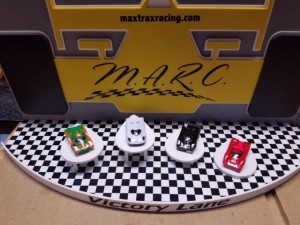 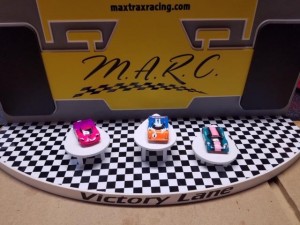 Mac set a practice track record for having his car land the farthest from the track on the floor.  Hal won the highest on the wall award.

For the Super Stock race, the pace was not as fast as the Spec Racers, but the lap totals were much tighter.  All of the drivers seemed to have figured out the squiggles.  There were a few hairpin pile ups that took out almost the entire field.  Again very competitive head to head racing. 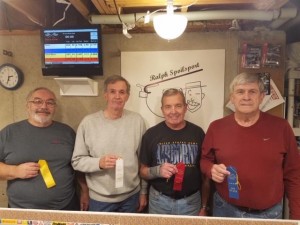 For Sportsman Terry took down the win, followed by O’Jimmy, Hal, Dave and Mike.  Jim Mac and Hal were the only racers to reach 100 laps in a heat.

All in all it was a great day of racing with a great group of guys.