Hingham Massachusetts, October 12, 2019 – A dozen drivers made the trip to South Shore Speedway to for another fun filled day of racing the Elvis road course.  Coffee 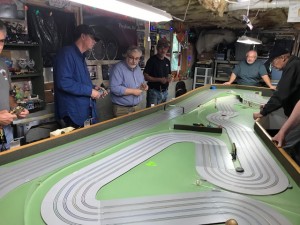 and donuts greeted the drivers as they arrived and set up shop.  The track was ready and so were the drivers.

First up was the first Open Weighted class race of the season.  People are really getting into this class and learning to tune these cars.  The field was a mix of Viper and BSRT chassis and I think everyone was running a 6-ohm arm this year.  After an hour and a half of practice, we were ready to race.

Sportsman and Pros run together in a Round-Robin for the first race of the day.  All in all, the racing was clean with some of the Sportsman right behind the Pros.  In fact, Jim Colligan was third overall! Race pace was fast with many drivers turning in lap times just 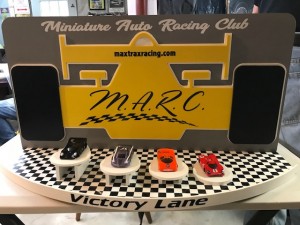 over 4 seconds.  The fast lap of 3.643 was set by Rob Hayes in the blue lane.  The next closest driver was the host Paul Ryer with a 3.757 in yellow.  Overall lap times were a tad quicker than last year and lap total were up.

“Oh Jimmy” started out the day with a win finishing 8 laps ahead of second place Terry Ayer.  Hal was 6 laps behind in third and Mike Tiffany rounded out the podium in 4th. 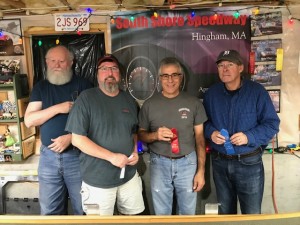 Rob Hayes didn’t beat Ryan’s lap total of 298 from last year, but the 281 laps he laid down was good enough to take the top spot.  John Pileggi is back on the scene and took second 11 laps back.  Track owner Paul Ryer apparently needs to work on the concept of home field advantage finishing 3rd 14 laps behind John.  Jim Mac took the last position on the podium for the pros.

With the Open Weighted program wrapped up, it was time to start getting ready for Super Stock.  Last year the Pros ran CMPM so everyone had to go back in their notes to dust off a setup to deal with the Elvis downforce.  Last year Reimels lost his car in the blackhole of shelves, but no cars were lost this time.  After some lunch and an hour and half of practice most people were ready to race and the rest resigned themselves that they would have to make do with what they had.  First up were the Sportsman who ran a very clean race.

“Oh Jimmy” sent the fasted lap at 2.844 in blue and yellow showing that consistant fast laps will get you on the podium.  In this case it was the top spot.  Terry Ayer took second followed by Hal Pierce in 3rd.  John Schoenfeld is the first MARC member to race the Wizzard Fusion and drove it to a 4th place position.  Nice drive John!  Dave was next followed by Mike who was fighting some controller and car gremlins.

The Pros also ran a pretty clean race although there were still some heat issues.  Although it was a different class Rob Hayes couldn’t resist the temptation to run low and paid the price with a cooked armature.  But Rob is a pro, so a quick motor change got back in the running.  When the smoke cleared, it was Mr. Superstock aka John Pileggi with the win followed by Ryer in 2nd, Rob Hayes in 3rd and Tom Jahl taking the last podium spot.  A bright spot for track owner Ryer was fast lap with a 2.604 in yellow.  Probably should have gotten the car to handle better in green, but oh well.

Ribbons were awarded, hands were shook and everyone packed up and headed out.  Thank you to everyone who showed up for another great day of racing.  Next race will be the inaugural event at Terry Ayer’s Ralph Spoilsport Speedway which is another MaxTrax.  Classes will be Spec Racer and Super Stock so save those SS notes from South Shore.  While that is going on, a few MARC members will be across the pond at the Le Mans 24-hour race in Derby England.  Good luck to everyone here and there on that race weekend.