A Lovely Day in the Neighborhood

Thompson, Connecticut  September 14, 2019  It was a lovely day in the neighborhood when 15 hardy races trekked out to the country to open the new season.  The lights were on

the track went hot and people started to work out the cobwebs that had formed since the end of last season. Assisted by coffee and various methods of sugar payload delivery the drivers soon were flashing around the track. Soon enough practice ended, and it was time for the first race. 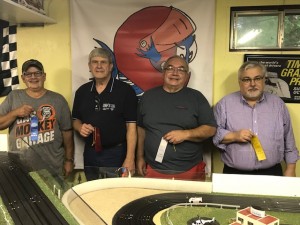 F1 G-Jets were the flavor of the day. The “all men up” round robin began with a first heat of 4 racers. It soon became apparent that host, track owner, and resident village idiot, your author had made an unforced error in the set-up of the computer resulting in the race being run in 3 groups of 5 . Once the dust had settled from all that racing Erik Eckhardt in Pro and Don Hall in Sportsman had pulled down wins. The finishing orders on track looked like this:

Once the dust had settled unfortunately Ryan’s car failed tech resulting in a DSQ. His car had a titanium rear axle in it Although BSRT does sell a ti axle it is not listed as a G-Jet stock replacement part and s therefore illegal. This put him down to 8th and bumped everyone below 3rd up one spot. This put John Pileggi on the Pro podium in 3rd place. 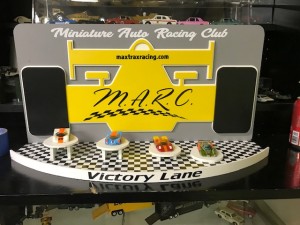 After a lunch of lasagna, chicken and fresh corn on the cob and a busy practice session it was time for the Super Stock races. The Sportsmen were up first. Dave Muse motored off into the sunset winning his first race of the year by 8 laps. Second was Don Hall. The podium was filled up by Terry Ayer in third. The full finishing order was:

Next up was the Pro Super Stock race. As the practice times suggested this would prove to be the closest race of the day with 2 lap or less margins being common.  In a not uncommon finish, Mr John, I practically own Super Stock, Pileggi had pulled down another win with a 2 lap margin over bridesmaid Rob Hayes. Filling out the podium in third exactly 1 lap to the section behind Rob was Paul Ryer. The complete finishing order was:

And thus ended the day and began another MARC season. I would like to thank all those who came including Mike Tiffany who made the drive from NY only to take ill after he arrived. Thankfully he made it home safely and recovered from being ill.

There was one other important piece of business that should be noted. Peter Lentros and Tom Gray brought some Wizzard Fusion Super Stock cars for people to inspect and try.  After several people drove them and most discussed them, a vote was taken as to whether this chassis would be allowed to run in MARC races. The Result of this vote: